The new school term at Pontville School started just last week and already they are bursting to share their good news.

Staff have been inundated with feedback from parents and carers of current pupils and leavers.

To start, Deb Crawford in the admin team reports on a former pupil who is thriving.

"Whilst making some destination calls over the summer, I spoke to Louise, Oliver’s mum. He is doing brilliantly and has passed his first year and is moving into the second year in September. Mum said that Oliver has had a conditional offer for university too from LMA in London for music production & performance. They are both rightfully delighted."

Luke’s mum, Jenny, contacted the school with some great news:

"Luke and I completed a virtual walk across the English Channel, which was 21 miles. Luke mainly did this on his skates while I walked. He was very pleased to receive a certificate and a medal in the post. He will bring his medal in to show his class. "

"Last term, Luke really enjoyed WOW day, and he told me and the guinea pigs all about it. He said he played the piano, and soon, his Grade 2 exam is in a few week's time. I home-schooled Luke for the whole of year 7 and it was awesome but finding a school where he is safe, happy, and celebrated for the amazing individual that he is, that’s like finding gold at the end of the rainbow." 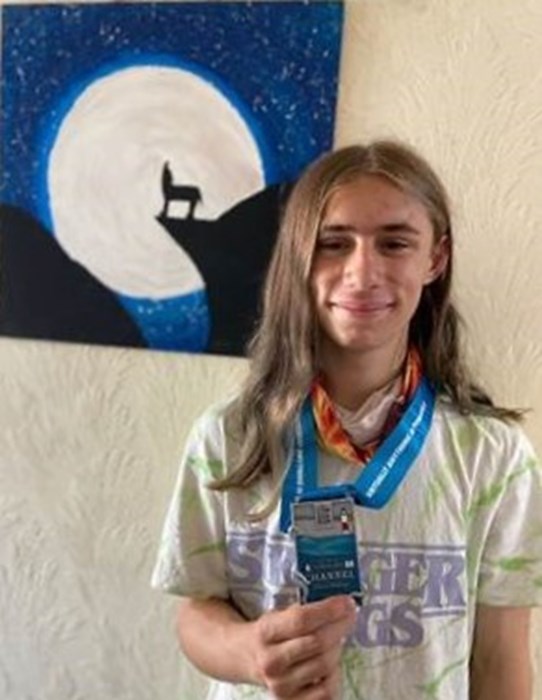 Luke completes a virtual walk across the English Channel!

Thank you for all the support you have given us as a family, but more importantly, the support you have given Martin. He has thrived at Pontville from day one. I never imagined that he'd stick it out, as when he joined yourselves, he was constantly missing for more days than he was home. We were delighted when he returned from one missing episode of four days and asked if he could have a shower and go to school. For us, this was the turning point. You 'got him'. You have given him football, and he has gone from strength to strength. You gave him the courage to apply for a job, which he got, and I'm sure he's already told you he starts the training tonight! You helped support him through problems and listened to him. You helped him get qualifications and life skills. I know you'll see him back next year, but we wanted to make sure you knew how much of a difference going to Pontville has made and that you have all played a part in him being who is today.

The school also received a letter from the headteacher of Asmall Primary School after the residential pupils organised a donation after their devastating fire.

I am writing on behalf of the staff and children to thank you most sincerely for the wonderful box of toys which you donated to help us recover from the fire which devastated our school in June. Our children were delighted with them and I know they will treasure your gifts for a long time. We especially loved the box which you decorated for us too…We have been overwhelmed by the generosity of the whole community. I have never known such kindness from so many people, many of whom do not know us at all. Your box of toys really did make a difference to our time at Edge Hill University, and I am sure that our children will enjoy playing with them again once we are back in school and nursery next term.

Finally, TA, Helen Cunnane, was presented with a hanging basket by the Therapy Team as a thank you for donating a large amount of Lego. 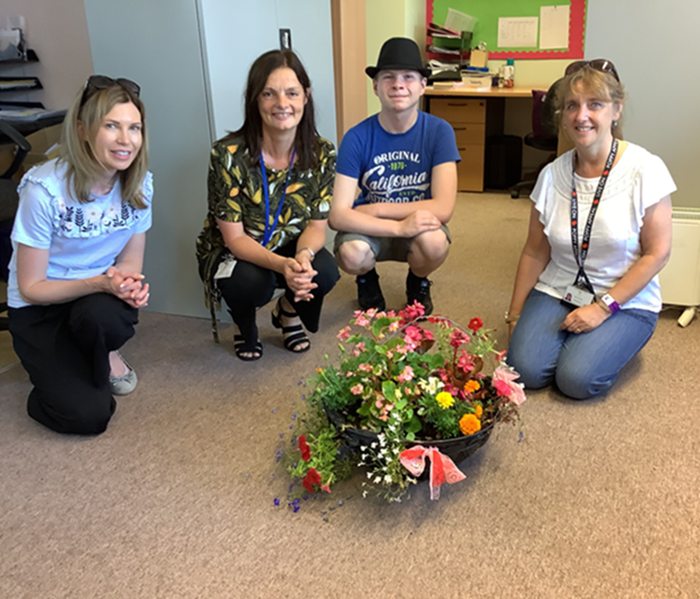 Teaching Assistant, Helen Cunnane is presented with a hanging basket for her kind donation of Lego